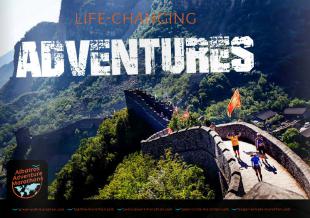 Icefjord Midnight Marathon will premiere in 2021 along the icy coasts of Greenland. Set in the summer, runners will get the unique opportunity to run under the midnight sun as they admire the impressive Ilulissat Icefjord.

The Big Five Marathon, held in a private game reserve in South Africa, is an exhilarating marathon and half marathon event where participants run across the African savannah among the wildlife.

Iceland Volcano Marathon is another one of our races that is yet to premiere, giving marathon and half-marathon runners the thrill of running across one of Earth’s geological hotspots, the North Volcanic Zone. The route will include running along the edge of the massive Hverfjall crater.

In September every year, the Petra Desert Marathon takes place in Jordan, with the race starting in the lost city of Petra. A beautiful course winds its way from Petra through the mountainous and desert landscape surrounding the city.

Our newest race takes place on our very own Danish Island of Bornholm. Marathon on the Rocks lives up to its name, with dramatic coastal cliffs and breathtaking views over the Baltic Sea.

For those looking to set a new PB, or qualify for the Boston Marathon, we’ve teamed up with Mikkeller to bring the World’s Fastest Marathon to life. With a nearly 100% downhill route on the Sierra Nevada in Granada, this run is made to push your limit.

We then move onto the arctic tundra and temperatures below 0 degrees Celsius. We're now in Greenland, just north of the Polar Circle, where one of our most exclusive marathon events takes place every October. Runners compete in a marathon, half marathon or a marathon and a half (over two days).

In November, our last marathon and half marathon event of the year, the Bagan Temple Marathon takes place in the magical plains of Bagan in Myanmar. It is a real pleasure to offer this race to our runners as the country has been closed for many years.

Albatros Adventure Marathons is owned and operated by Albatros Travel. Find out more: albatros-adventure-marathons.com. For more information, take a look at the brochure.